CCF Reveals Secret ‘Treasure Chest’, Plans to Give it All Away

CCF Reveals Secret ‘Treasure Chest’, Plans to Give it All Away

CCF Reveals Secret ‘Treasure Chest’, Plans to Give Away

If you’ve ever worked or volunteered at a local nonprofit, this may not come as a surprise, but there is a treasure chest hidden somewhere. Its contents, unspoken. Its value, plentiful – and only a select few have the keys.

“When I first began getting involved in local charities, I heard whispers of its existence – but is wasn’t something you mentioned or asked about,” said Justin Swan, now CEO of Cascade Community Foundation.  “It has many names, depending on its gatekeeper.  The Box, one organization calls theirs Queen Anne’s Revenge, which I found clever.  I’ve always referred to it as the Treasure Chest.”

What Swan speaks of is a cache of unused gift cards and services, donated over time, that compile for later use.  Generous non-cash contributions – usually from area businesses, but also from individuals who simply couldn’t afford a financial gift.  The want to give what they can, resulting in a stockpile valued well into the thousands of dollars.

Editor’s Note: Mr. Swan agreed to this interview under the strict condition that the location of Cascade Community Foundation’s Treasure Chest not be disclosed.  I was, however, recently given exclusive access during its opening as the foundation began preparations for #GivingTuesday.  The community foundation, which has served Ada, Cascade and the greater Forest Hills area for two decades, planned to unveil the contents of the chest later this year.  But with the advent of Covid-19, #GivingTuesday was moved ahead nationally to May 4, 2020.

That is when I learned of Swan’s audacious plans for Cascade Community Foundation’s top-secret Treasure Chest. To empty it all in 2020.  To give it all to the public they serve.

“I thought we would have more time but the urgency and need is now,” Swan shared. “We will do it again later this year, but this community needs a shot of kindness and generosity, so we’re going to give it to them.”

But there’s a twist.  The original idea was simple, expose the contents of this secret treasure in a way that can bring together the community around something special.  The idea – generated over a recent Zoom video chat in February – quickly blossomed once the quarantine was extended and #GivingTuesday was announced. Then something special happened…

“The small business community should get some exposure during #GivingTuesday as well,” Swan shared. “This day-of-giving can’t be limited to funding local charities.  Not in 2020.  It’s about lifting up entire communities.  That’s the impact we want to have.”

As a result, Swan began reaching out to local small businesses to help promote “the plunder” as he calls it.  A multi-business orchestrated raid on the chest to encourage financial support of CCF on Tuesday, while promoting and paying homage to the generous small businesses during this unprecedented time.

One of those small business owners is Andrew Hawks (Those Guys Painting Company), who donated a full day of painting services earlier this year. 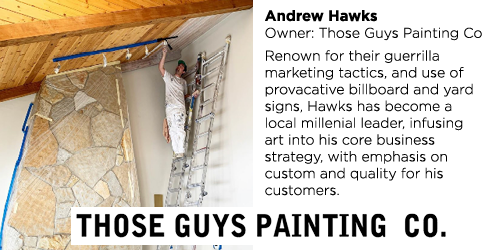 “We’re excited to be working with Justin and the Foundation,” said Hawks.  “It’s great timing as we transition back into normalcy, and into our busy summer schedule. It’s nice to reconnect with homeowners, while supporting the cause.”

In order to reduce unnecessary overhead and increase grantmaking to area nonprofits, Cascade Community Foundation opted out of their office lease late last year.  When Hawks learned of the decision, he pledged to lead a team of volunteers to paint their new location – whenever that may be – at no cost.  But, with no plans to open a new office coming anytime soon, Those Guys became part of a bigger plan.

“When the Foundation approached me about repurposing our gift, I was all for it,” Hawks continued. “That’s the type of selfless character we want in a charitable partner, and it’s a great way for Those Guys to be even more helpful in the community.”

As a result, Those Guy’s repledged, offering a Those Guys for a Day package. A gift valued at $1,200 which will place a painter, and Hawks himself, in your home to evaluate and complete painting projects for an entire day.  Others are being revealed as we inch closer to #GivingTuesday, but Swan is reluctant to reveal too much too soon.

“This is rather unprecedented; to unlock the Treasure Chest,” Swan half-joked while offering a nervous laugh. “I’m probably breaking all sorts of oaths as the head of a local charity, but it’s the right thing to do right now, and it shouldn’t just be the local public, or our foundation that benefits, but the small businesses who are scarfing so much.  The business owners who filled the Treasure Chest to begin with.”

You can enter to win prizes from the CCF Treasure Chest, like Those Guys for a Day, by clicking here.